Following a visit of the Fédération Française de Tennis de Table (FFTT) at Spinsight at the end of 2022, Spinsight got invited by FFTT’s National Technical Director, Jean-Nicolas Barelier, to support a high-class training camp in the mountains of the Pyrenees in Matemale from January 6-9.

Over 40 French national players at the age of under 23 years benefited from a highly professional set-up provided by the FFTT: about 20 top coaches from France (among them also Nicolas Gaudelas and Guillaume Simonin), 2 intensive training sessions per day, and 1 day of special education including Spinsight. Also present was French national champion Alexis Lebrun who knows Spinsight already and who passed on his expertise to the other players.

Guillaume Simonin, responsible for the under 13 years old, concluded: „The arrival of Spinsight was a real added value for our training camp. Our players were able to take advantage of this tool to assess their ball quality. The potential of Spinsight is very great, especially for training serves with a lot of relevant data instantly available.”

Hermann Mühlbach, senior expert digital training at Spinsight, demonstrated Spinsight to all players and coaches, and helped over 33 players to do a Spinsight performance test. “The high professional level of this camp shows why the FFTT’s youth team is so strong, and underlines FFTT’s high ambitions ahead of the 2024 Olympics which take place in Paris 2024. Spinsight is pleased to have the chance to work with such a strong federation.”

”It is a great pleasure for Spinsight ESN Digital to hand over the first SPINSIGHT elite system outside Germany to Malte and Truls Möregårdh”, SPINSIGHT ESN Digital CEO Dr Hans Persson stated on Thursday morning the 27th of October in Blomsterbergshallen, the training location of Swedish top club Eslöv AI BTK. ”The Möregårdh brothers have proved they are passionate and curious to challenge status quo in how to train and so create the future table tennis. With Spinsight they now have a performance tool to do so.”

In a special ”secret” room with black walls, the new Spinsight elite device stood beside the table on the bright red floor. Malte Möregårdh, 25, did not only receive the brand new SPINSIGHT elite system but also a certificate which confirms he is now a qualified Spinsight Elite Level 1 Coach. The first ever actually, completely educated by digital training expert of Spinsight Hermann Mühlbach.

”It feels as good as it possibly gets”, Malte said with a big smile when all photos had been taken and the second day of the final practical part of the eduction had ended. ”It is unbelievably exciting. Me and Truls have tested SPINSIGHT occaisionally and we have been longing so much to get a system so we can use it in our daily practice here in Eslöv.”

Spinsight is a gamechanger in table tennis. It is the first device that can measure spin, speed, placement and trajectory of the table tennis ball and show the result on a screen simultaneously when the stroke is made. It is built in Germany and has been developed by SPINSIGHT scientists over the last two years with help of elite coaches of compass und ESN Sports ACE.

”It will have a big influence of the future developmet of Truls as a player and also of me as a coach”, Malte continued. ”Our communication will be based on facts instead of assumptions which will make it possible to speed up the process. Also we will achieve the maximum training effect on all details and variations in Truls´game, and to develop it further.”

Hofheim, Germany
Matt Pound, Managing Director of WTT, World Table Tennis, the commercial and events company of the International Table Tennis Federation ITTF, visited ESN and Spinsight. The former ITTF Marketing Director and Head of Media was quite impressed when Spinsight was presented to him for the first time. Pound concluded: “The fact that Spinsight can measure spin live is a game changer!” 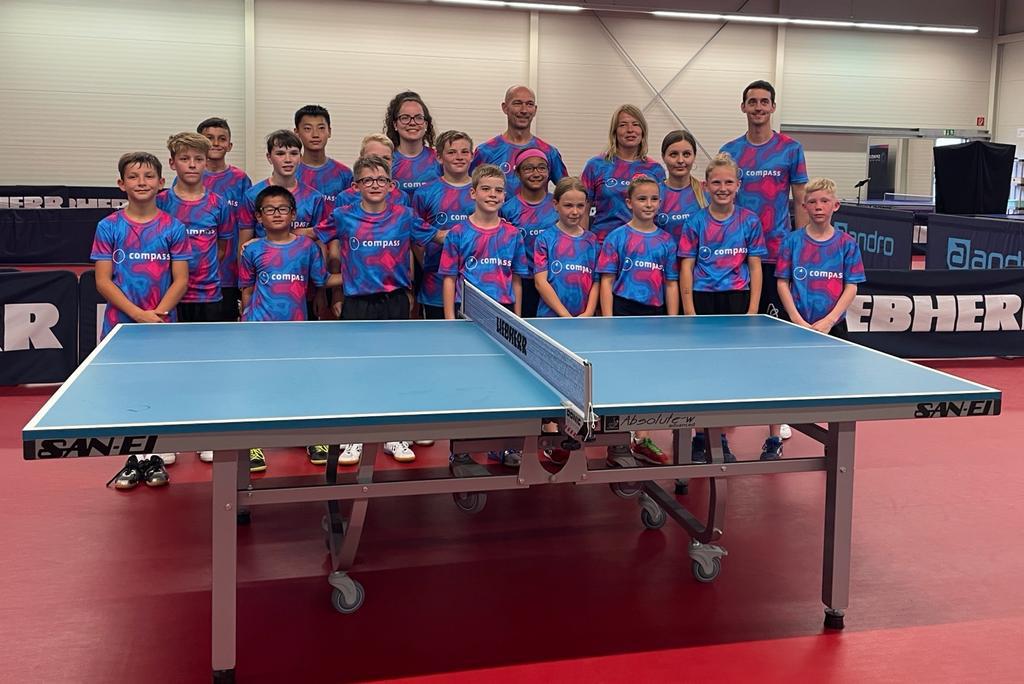 Fifteen players from seven countries born 2009 to 2013 gathered on a compass camp in Ochsenhausen in Baden-Württemberg. Nine coaches trained the players and there was a loaded programe for the kids as well as for the several parents who accompanied their sons and daughters. One of the very highlights was a lecture on Spinsight, and that everyone got the opportunity to make a performance test to understand the current status of their skills. To exceed each other speed and spin in the ball became a funny battle, and everyone wanted to continue much longer than it was time allocated for. 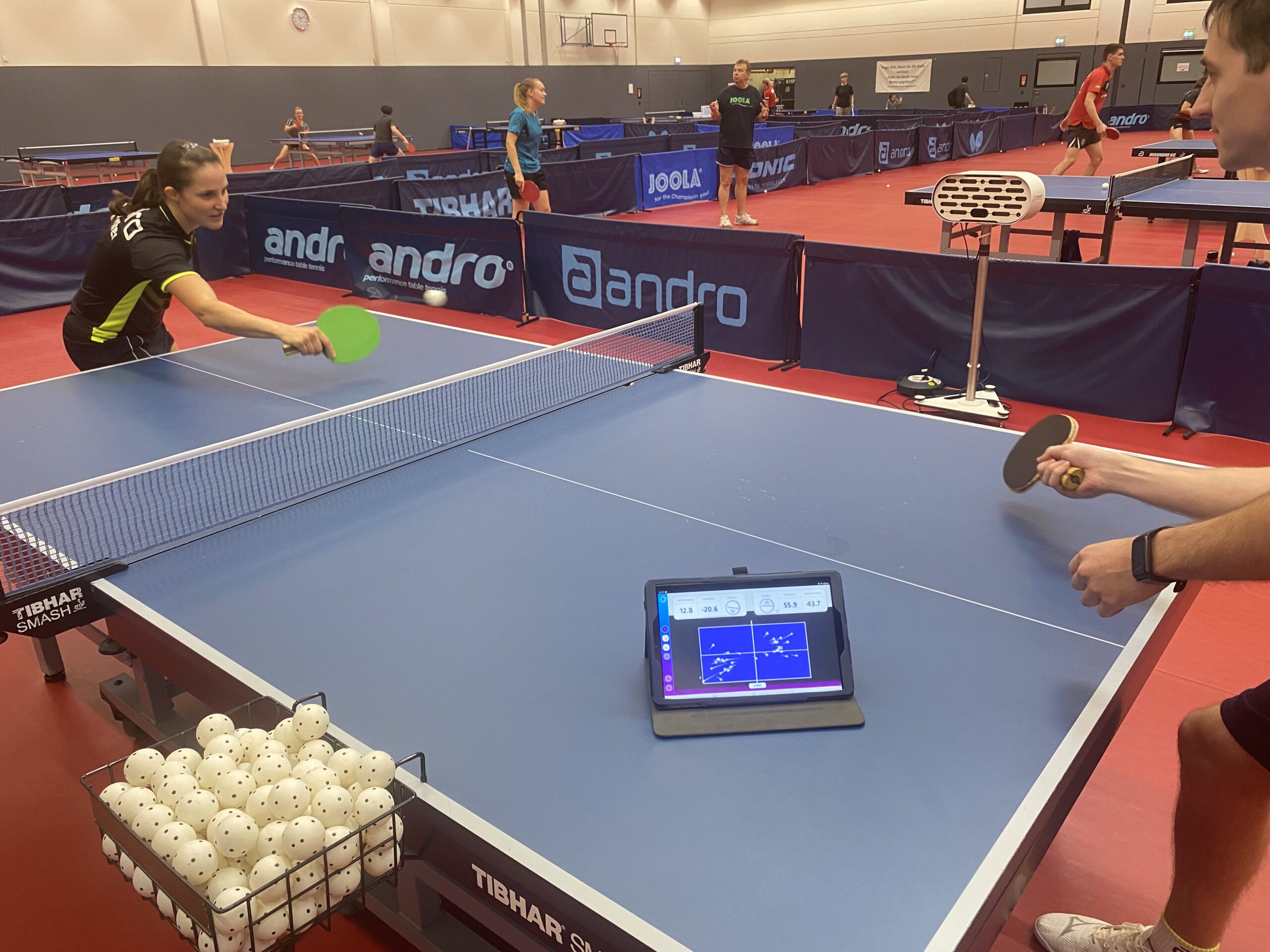 Düsseldorf, Germany
After talks and introduction in Hofheim with DTTB President Claudia Herweg and DTTB Sport Director Richard Prause, the Spinsight team went to the DTTZ-Centre in Düsseldorf for introducing and testing Spinsight among the German national team. On their free time, after ordinary practice, the male players like Ovtcharov, Dang Qui, Beneditk Duda, Tobias Hippler and Kai Stümper were all curious to test the Spinsight innovation themselves.
The same with the women´s team the day after with Nina Mittelham, Sabine Winter, Wan Yuan, Franciska Schreiner and Chantal Mantz. All players reacted very positively on Spinsight and it was agreed to continue future cooperation talks. 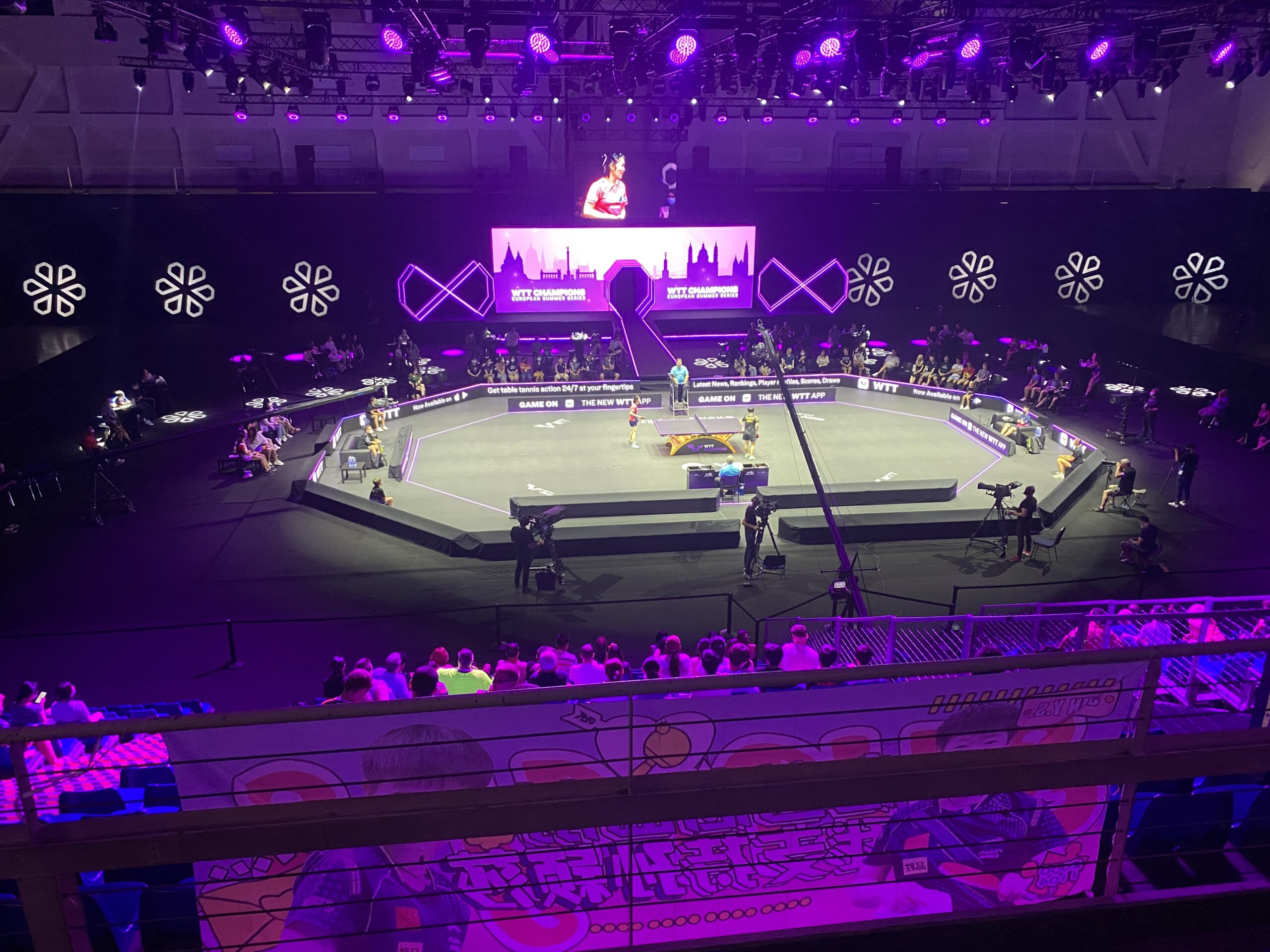 Budapest, Hungary
Steve Dainton, ITTF Group CEO alongside Matt Pound, Managing Director of WTT, invited Spinsight to the WTT Champions event to explore how Spinsight could support the broadcasting experience for viewers. Together with Joachim Davy, Content and Creative Director at WTT, the Spinsight team discussed the possible integration of Spinsight into the Infinity Arena layout. Further, the team got a behind the scenes view about the broadcasting thanks to Melissa Soobratty, Broadcasting Director, and the IMG team around Mike Rehu. This first meeting was positive and both sides agreed to elaborate possibilities further. 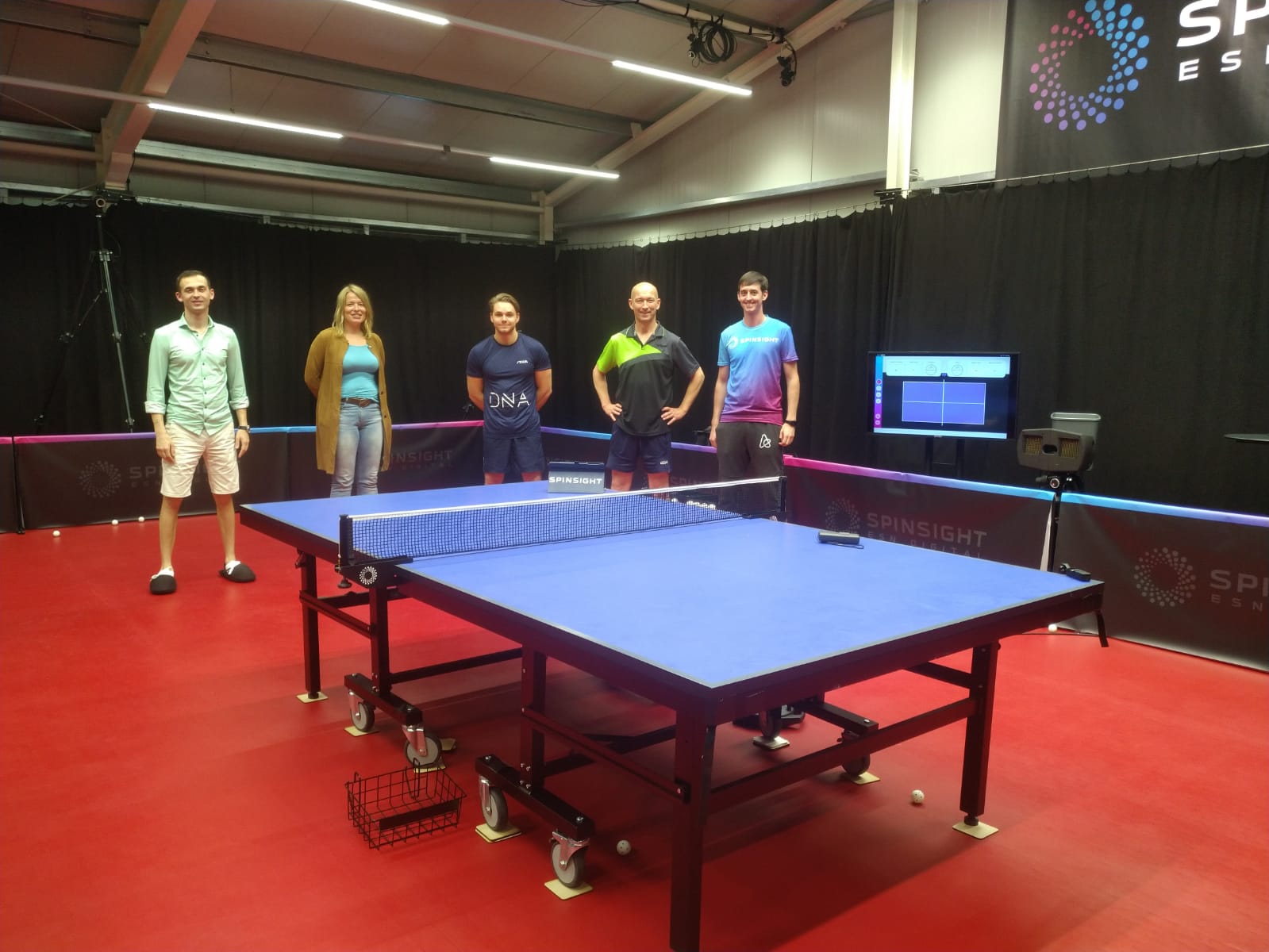 Hofheim, Germany
Together with Evelyn Simon, Bogdan Pugna and Oliver Alke, all expert coaches of compass and ESN Sports ACE respectively , also Malte Möregårdh participated in the first ever Spinsight elite coach education. ”Spinsight is awesome!” he commented after ten hours of practical and theoretical tuition. ”I am convinced it will make a revolution in the way to practice. It is a total game changer! The more I understand of it the more I realize how much it can be used. Now the coach and the player both can observe what is most efficient in training, it is not only up to the feeling of the player as it has been til now. I want to use it daily!” 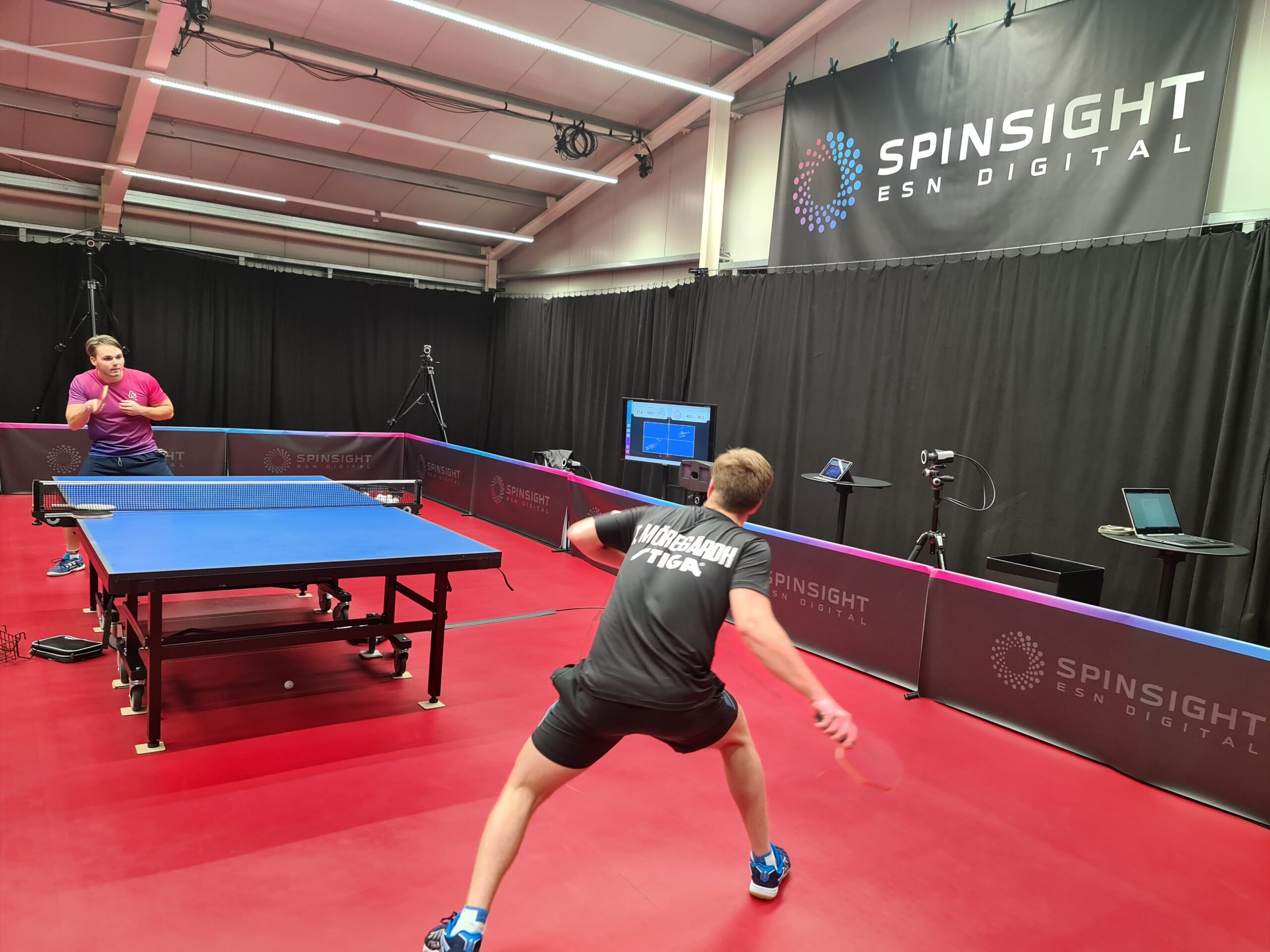 Hofheim, Germany
20-years-old Truls Möregårdh, World Cup singles finalist in Houston in November 2021, and his personal coach and brother Malte Möregårdh visited Spinsight. During the performance test with Spinsight Truls proved his ability by breaking two new records. Innovation, creativity and variation are the pilars of Truls playing style and he is as convinced as determined that Spinsight will be a very important tool to develop his unique style further. 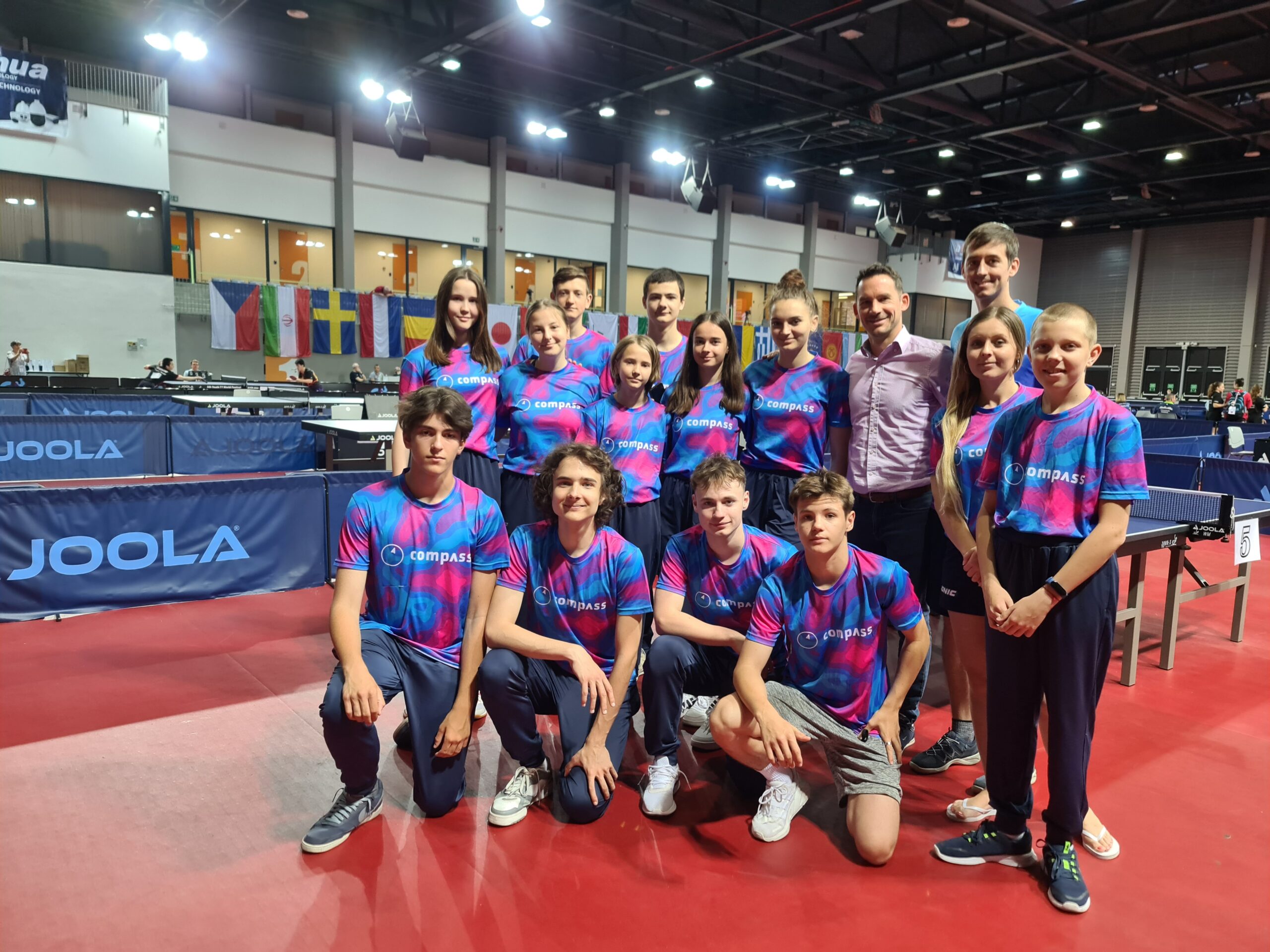 Györ, Hungary
232 players from 20 countries gathered to participate in the fifth Youth TT World Festival. Also the Spinsight team was there, opening for some 50 national youth players to test the Spinsight system at a training camp that also was organized and linked to the competition. Among them players from countries Uzbekistan and Iran. The feedback was very enthusiastic from the players, as well as from the group of table tennis fans who through a Spinsight practise session had the chance to better understand their own game in a more profound way. 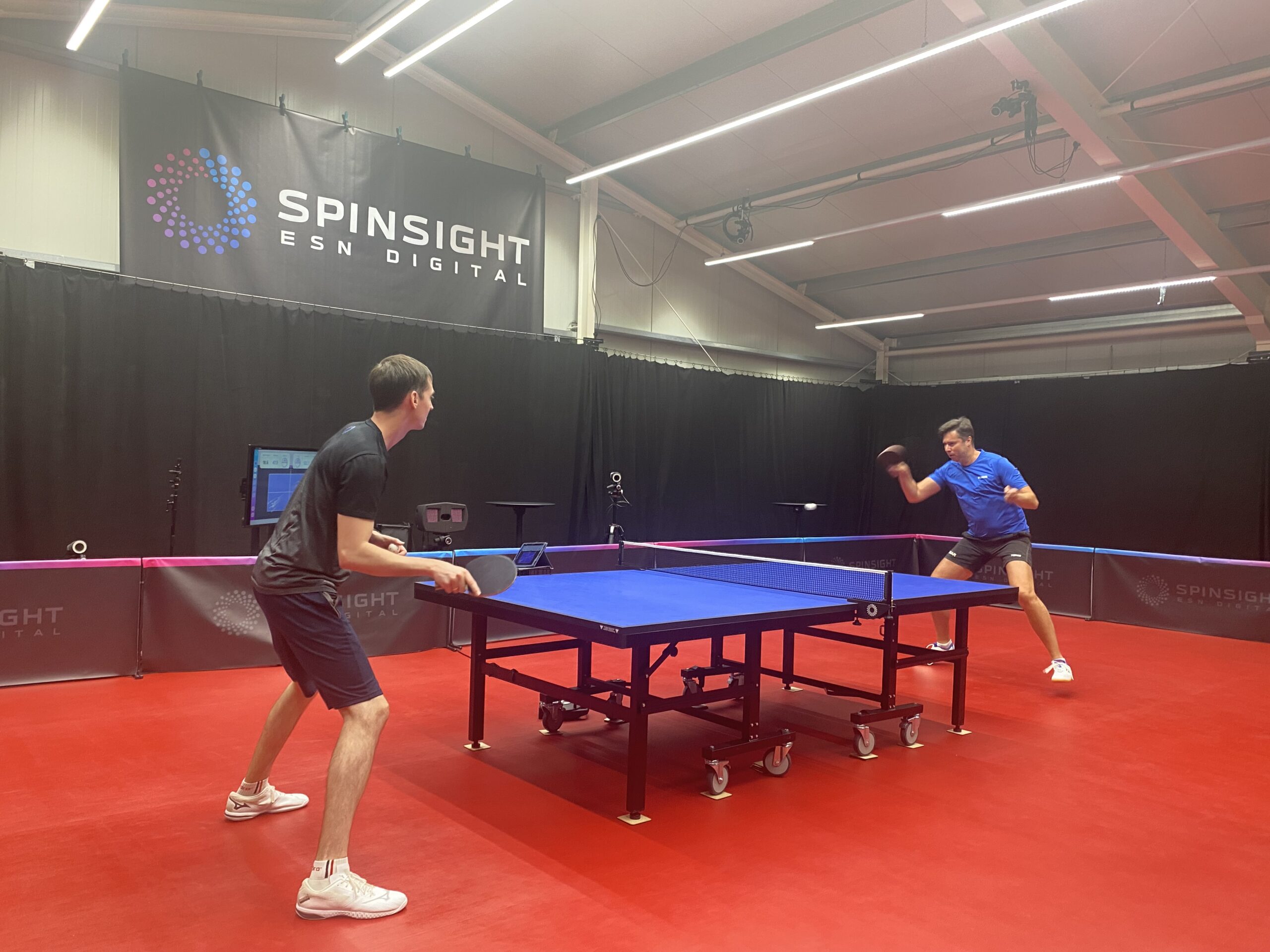 Hofheim, Germany
Vladimir Samsonov was the first world top ten ranked player that used rubbers produced by ESN. Still he had never been on a visit to the table tennis rubber production company in Hofheim, Bavaria.
Not until 24th of May 2022 when he came to see ESN and to test Spinsight. The table tennis icon found Spinsight great, and finally got a factual scientific answer on why his services had worked so well throughout of his long career, highlighted with three World Cup gold medals and becoming European singles champion three times as well.